Home / Child Custody Laws in Florida / What Rights Does a Florida Father Have When His Name is Not on the Birth Certificate?

What Rights Does a Florida Father Have When His Name is Not on the Birth Certificate? was last modified: October 9th, 2017 by Howard Iken What Rights Does a Florida Father Have
When His Name is Not on the Birth Certificate?

False Claims of Paternity Hurt All Those Involved

An article published over ten years ago stated an astonishing piece of information—that one in 25 fathers might not be the biological parent of the child they believe to be theirs. Of course, this statement was qualified with an acknowledgement that the figures were drawn from those seeking proof of paternity—and, after all, uncertainty over paternity is almost always the reason for a paternity test.

In other words, the numbers might be overstated because the people who were surveyed had doubts about paternity. A later study, done in 2011, bumped that number up to one in ten whose father was not who they believed him to be, but again, the numbers came from those who had doubts about their paternity and were seeking confirmation.

In fact, false claims of paternity may hurt the child more than anyone involved. A father with no DNA connection to the child may be forced to pay child support, while the true biological father is denied the right to know his child and the child is denied the truth of his or her paternity.

What Responsibilities Does a Florida Father Have When His Name IS on the Birth Certificate?

When parents are married prior to the birth of a child, there is a presumption that the husband is the legal father, therefore paternity for the child is automatically established on the day of the child’s birth. Paperwork is filled out at the time of the child’s birth, and the matter is considered finished. 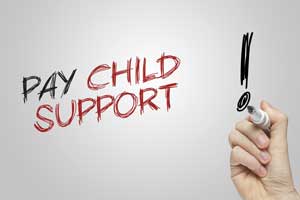 As the father of a child, there is a responsibility to take care of that child—financially, emotionally and physically—until the child is 18, or graduates from high school. Should the parents divorce, barring any bad behaviors on the part of the father, he will continue to have visitation rights with the child, and will co-parent, with the same responsibilities he had when the parents were married.

Acknowledging Paternity When Parents are Not Married

There is another route for paternity acknowledgement, other than the father having his name on the child’s birth certificate. In the state of Florida, on the day a baby is born, unmarried parents may sign a paternity acknowledgement form at the hospital. The hospital will send this acknowledgement form to the Florida Office of Vital Statistics, and the father’s name will be recorded. Should both parents not be together at the time of the baby’s birth, an Acknowledgement of Paternity can be found online and printed, then completed by both parents, notarized and sent to the Vital Statistics office.

Once this is done, should the child be put up for adoption, or if there is a dependency case later on, the father must be legally notified. Once again, whether the couple is married and the father’s name automatically goes on the birth certificate or unmarried, and the father’s name is added to the birth certificate through signing a paternity acknowledgement form, no custodial rights are automatically bestowed upon the father. Further, it is important for the father who wants his name added to the birth certificate to fully understand that it will be extremely difficult to later disestablish paternity (even if the father were to find out he was not the child’s biological father), and that he will be required to financially support the child.

When both parents sign the Acknowledgement of Paternity form, they are swearing they are the natural parents of the child. That being said, there is one “loophole” to the process. If a court hearing is held within 60 days of when the Acknowledgement of Paternity form was signed, the Acknowledgement can be cancelled. The birth mother or the birth father can request such a hearing, although the cancellation only applies to the father’s paternity rights. If 60 days passes, and no request for cancellation is made, then under Florida law, paternity is effectively established.

The Methods of Establishing Paternity in Florida

There are five different ways paternity may be established in the state of Florida. These include:

Genetic Testing and Court-Ordered Paternity by a Judge

The first two methods of establishing paternity—marriage and filing an Acknowledgement of Paternity form—have been discussed. The third method—genetic testing—is used frequently now that DNA science has become so cutting edge and reliable. If the mother is requesting child support, or custody or dependency is an issue, a Florida judge could order DNA testing to definitively establish paternity. If an alleged father is properly served paperwork, ordering him to undergo genetic testing, yet he skips scheduled genetic tests and/or court hearings, the judge may, through default, declare him the legal father (the fourth method of establishing paternity, court-ordered paternity by a judge).

Suppose an unmarried couple have a baby, and do not fill out Acknowledgement of Paternity forms. If the relationship later ends, the father may suddenly be forced to consider the necessity of establishing paternity if he wants to continue to be a part of his child’s life. In other cases, the biological father may have really had no relationship with the child since the birth, and it is more likely that the mother will be requesting genetic testing, primarily to receive child support for the child.

Genetic tests do not require a baby or child to have blood taken via a needle. A swab collects cells from inside the cheek area, near the mouth—a totally painless process. When genetic tests are done, all three parties (mother, child and father) must provide DNA samples and have their photo taken. The comparison of the cells will determine whether the alleged father is the biological father.

Methods of Disestablishing Paternity in Florida

Let’s assume a couple is not married when a baby is born. The father, truly believing he is the biological father, files paperwork after the birth establishing that he is the child’s father. Year later, the couple splits up, and the father pays child support for the child and has regular visitation. The mother remarries, and during an argument, tells the father he is not the child’s biological father.

At this point, should the father decide to disestablish paternity, he will be required to file a Petition to Disestablish Paternity (in the circuit court with jurisdiction over the case), which must strictly comply with Florida Statute 742.18. There are several items which must accompany this Petition, including:

The court must then find that:

In some cases, even if the legal father properly files the Petition for Disestablish and follows every step in a timely and correct manner, the court could deny the petition on the grounds that:

Many courts will outright deny a petition based on what is best for the child. Most courts are reluctant to allow these petitions to proceed, especially after a child is several years old.

Should You Have to Pay Child Support if Your Name is Not on the Birth Certificate? As you have probably figured out from reading the above, if you were not married at the time of the child’s birth, and you did not file an Acknowledgement of Paternity form, then if the mother wants you to financially support the child, a DNA test will be required to prove you are the biological father of the child. If the genetic test does prove you are the father, then the state of Florida assumes you have a financial responsibility to the child, and you will be required to pay child support. If you have paid child support for a considerable period of time even though your name is not listed as the father on the birth certificate, and you doubt you are the father, you cannot simply stop paying child support without following the rules for disestablishing paternity.

What is the Putative Father Registry, and How Could It Affect Your Rights?

If the mother of a child you believe to be your biological child is placing the child up for adoption (and the two of you were not married at the time of the child’s birth), then should you desire custody, rather than having the child placed for adoption, you might consider the Putative Father Registry. Putative means “generally considered to be,” and the Putative Father Registry allows you to contend you are the biological father of the child, effectively preserving your right to notice and consent in the event of an adoption. Registering with the Putative Father’s Registry is a time-sensitive issue, in that you may not make a claim of paternity after a petition for termination of parental rights has been filed.

Do You Have Rights if Your Name is Not on the Birth Certificate?

As you can see, the answer to the question of whether you have parental rights if your name is not on the birth certificate depends on a variety of things. Did you file with the Putative Father’s Registry? Have you requested a genetic test or otherwise gone through legal channels to establish paternity? Are you paying child support that is not court-ordered? Do you regularly see the child? Have you filed an Acknowledgement of Paternity form, or did you marry the child’s mother after the birth? If you are the biological father, then but your name is not on the birth certificate, then you may have to take extra steps to gain the parental rights you are entitled to. While the process can be complex, an experienced Ayo and Iken custody attorney can help you navigate the process, making sure your forms are filled out correctly and filed within the allowed time limits.