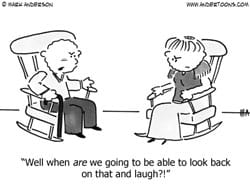 A combination of the economic downturn, epidemic in drug addiction, and the collapse of the housing market has contributed to the problem. In the last decade more and more adult children have looked at their parents as a comfortable, cushy lifeboat that has lots of free perks. In situations where the adult children get in trouble, the grandparents provide the only viable safety net for their grandkids. Grandparents do not necessarily have rights to grandkids, but you would not know that from empirical evidence. More and more grandparents are walking around with multiple grandkids tagging along.

So what about grandparent rights to custody? Do grandparents have any rights under Florida custody laws? The answer is a very definite yes.  But accessing those rights is a complex, uncertain journey through the legal system. The reason: the US Constitutioncontains strong rights for parents to raise their children in private. Parenting rights are strongly protected. And anything that impacts parenting rights – such as grandparent rights is impacted by the constitutional right to raise your kids.

In the last decade grandparents have been unfairly burdened by the need to support their adult children or step into their children’s place as surrogate parents for their grandchildren. Not only is it expensive, but it is a lifetime commitment. Of course most grandparents are not complaining about having custody of their grandkids. Having children is a wonderful experience. Most grandparents look like they are in heaven when spending time with their grandkids.

The real issue: getting legal rights to the grandkids. A legal right to custody is ultra-essential when arranging for school, medical, activities and the other normal requirements of any child.  Plus there is always the game of “ransom” played by adult children. Many of them constantly threaten to take back their children if the grandparents don’t “play ball.” Playing ball usually means giving money, items, or living accommodations to adult kids.  The grandparents are caught in the middle of a game that is never fair.

Are there Grandparent Rights in Florida ?

There is an adoption law in Florida that has special provisions for immediate family members. Again, grandparents have an opportunity to use this statute to seek permanent custody of grandchildren.

Finally, there is a statute called “Custody by an Extended Family Member.” While this law is intended to give temporary custody in situations where parents are cooperating, it can also be used in an adversarial situation. Grandparents can get temporary legal custody of the children under certain defined situations.

It is not easy being a grandparent these days. But the rewards that come with protecting and raising your grandchildren are unlimited. There is no greater feeling than rolling out of bed each morning and hugging your grandkids. As the person protecting your grandchildren from the entire world, you deserve recognition and legal status. Every situation is different. Be sure to visit us to discuss your specific situation and how you can formalize your rights to your children.